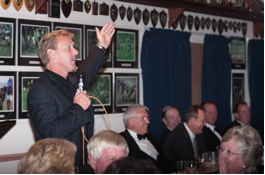 As a lad, Justin wasn’t sure whether to be a professional soccer player, test cricketer or AFL footballer. So he became an accountant.

After University, Justin travelled to the United States, Canada, Europe and Japan, before lobbing in beautiful New Guinea where he ran several businesses. He became the head of AFL-PNG, arranged rugby league tournaments and organized visits by prominent Australian sporting personalities. He was also held up at gunpoint three times.

Finally dragging himself away from the tropical paradise of Port Moresby, Justin settled in Queensland. In 2006 he was contracted to be the National Manager of the ‘World’s Greatest Shave’ for the Leukaemia Foundation, helping raise over $12.5m, a Guinness World Record. Meanwhile, his growing reputation as an organiser and presenter of entertaining, profitable sporting functions saw that business take off. Not only were his clients happy (Justin since 1999 has helped sporting clubs and charities raise more than $25 million!) but past and present stars were clamouring to get on board.

So these days Justin isn’t sure whether to be a passionate Master of Ceremonies, a brilliant Auctioneer or an accomplished Comedian. So he’s become all of them! His high-energy performances have earned him rave notices. He’s relaxed, confident and very funny. Not bad for an accountant!

If you book JK as your Charity MC Comic Auctioneer you get all below:

JK (Justin Karcher) gets it. He’s there to keep the event running smoothly, inject humour where needed, juggle the stakeholders to keep them happy and ensure that if everyone does their bit the event is a memorable one. He’s also a clever exponent of identifying value, humour, research and engagement during the most important parts of a fundraising event – table bingo and the auction. I enjoy working with Karch and I hope you do too. Merv Hughes – Cricket Legend