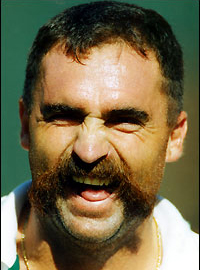 One of the true characters of modern day sport, Swervin’ Mervyn’ made his first class debut for Victoria against South Australia in ‘81/’82. It wasn’t until ‘85/’86 that he was picked in the Australian side.

His first match was against Pakistan but only taking the one wicket he wasn’t selected again until the Ashes series the following year. From then on his career as an Australian fast bowler went from strength to strength.

Not only was he a regular wicket taker but his look and personality helped him to become a crowd favourite the world over. At 6’4” and with a huge handlebar moustache he was hard to miss.

Merv had a seemingly endless loping run up to the stumps and if he took a wicket most teammates ran for cover. For such a big man he was considered overly affectionate by his fellow players. The odd tongue slipped into an ear was not unheard of.

At his home ground, the MCG, he was especially revered. His warm up routine in front of Bay 13 with the crowd joining in turned him into a cult figure.

At Perth in 1988-89 Merv Hughes completed a ‘complicated’ hat trick in three different overs. He had Curtly Ambrose caught behind with the last ball of one over, ended West Indies’ first innings by removing Patrick Patterson with his first ball of the next and more than a day later completed his hat-trick by trapping Gordon Greenidge LBW with the first ball of West Indies’ second innings. Merv played his last test in ’94 against South Africa.

Still a favourite throughout Australia and a scholar of the game, Merv became a national selector in 2005.