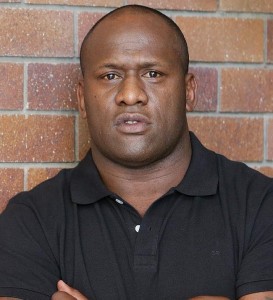 At 6’3″ tall Dell is a larger than life character and a very entertaining speaker. A die-hard QLDer who loves to talk about State of Origin and his glory days in green and gold for the Wallabies.

Wendell Jermaine Sailor is an Australian former professional rugby football player who represented his country in both rugby league and rugby union – a dual code international. He is an Australian Torres Strait Islander.

Sailor’s large frame and bullocking style changed the way wingers played rugby league in the late nineties. His big-money move from the Brisbane Broncos to the Queensland Reds in 2001 created many headlines, as did his move at the end of the 2005 Super 12 season to the New South Wales Waratahs.

He has often attracted public attention during his career, none more so than in 2006 after the return of a positive drug test following the Waratahs v Brumbies match at Aussie Stadium on 16 April 2006. This put an end to his rugby union career as he received a two year suspension from all forms of professional sport. He successfully returned to rugby league in May 2008 with NRL club St George Illawarra Dragons once his ban expired, playing an additional two seasons under his old coach at Brisbane, Wayne Bennett, before retiring.