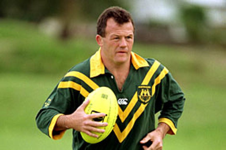 With a nickname like ‘The Axe’, Trevor Gillmeister could have been a feared gangster in the Chicago underworld. But it was on the footy field that Gilly made his mark as a ferocious tackler. As Paul Langmack says, “He used to snap you with his hitting in defence!”

By no means a huge man, Gilly often defied his stature by taking on opponents like NSW hardman Paul Harragon, six inches taller and three stone heavier. In his 22 Origin games, he is remembered for his fiery attacking and brutal defensive clashes with the Blues.

One of Gilly’s finest achievements was captaining Queensland to a 3-0 series whitewash in 1995 under Coach Paul Vautin. He had shown all his customary aggression and stinging defence in the first two games, but was taken ill in the lead up to the third match. Gilly played that game (wild horses wouldn’t have been able to stop him), but straight after was rushed back to hospital for urgent treatment. He had guts!

Still heavily involved in the game, The Axe will re-live some of his finest moments and also recall when he was on the receiving end of some big hits. As always, there’ll be no backward step!

“From the Director down to the punters everyone was very impressed! I knew he was funny but I did not realise what a great speaker he was.”

“He was fantastic! He stayed the whole night – left on the last bus with all of us.

He was happy to sit down and have a beer and a chat with everyone – very easygoing.”