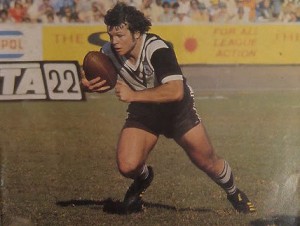 I’m glad I was never on the field at the same time as Les Boyd. Even team-mates were a little wary of the dynamo, who played the game with brutality, remarkable timing and agility.  Les, one of “The Invincibles” of 1982, could well be the toughest bugger ever to don a Rugby League shirt and he was feared whenever he played.

The Second Rower was once described as ‘fat, slow and predictable’ which was about as wrong as any critic could be. Boyd’s talent and work ethic saw him selected for Origin eight times and for his country 17 times. It’s true that Boyd’s volatile nature on the field (in contrast to his quiet off-field nature) saw him sent to the sin-bin more often than most players. But no-one could say he gave anything less than 100% in battle.

There are some legendary incidents in which Boyd took centre stage. In the opening game of the 1983 Origin series at Lang Park, Boyd and Daryl Brohman had a ‘coming together’.  During that same game, Boyd and Manly team mate Paul Vautin had a ‘tete-a tete’. In 1984 while playing for Manly, Boyd and Canterbury hooker Billy Johnstone ‘clashed’, resulting in a rather long ‘holiday’ for Les.

Yes, Les Boyd played close to the edge. But his record speaks volumes for his influence on the game. And boy, does he have some stories to tell about his time as the toughest bugger ever to don a Rugby League shirt!