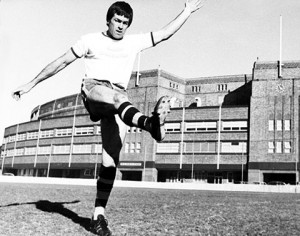 John ‘Bomber’ Peard became the most feared man in rugby league in the 70s. His revolutionary towering punt kick, popularly referred to as a ‘bomb’, terrorised opposition players, especially the fullbacks and wingers they were aimed at.

The introduction of the tackle rule had meant that field kicking in general play became more of a feature.

Peard, already a talented five-eighth, was with the Roosters under the inspired Jack Gibson and supported by fast and bullocking backs when he began to use the ‘bomb’.

Peard’s towering punt would travel high, but not far, and once at its zenith, would drop out of the sky only for someone like a Ray Price to leap above a pack, Aussie rules style, catch the ball and score a try! The effect on the opposition defence – on rugby league itself – was profound. As the tactic evolved, different versions of attacking kicks opened the way for the use of the winger-targeting cross-field bomb.

The game’s modern incarnation can be traced directly back to the day little Johnny Peard transformed himself from a very good link man into ‘The Bomber’, the most feared man in rugby league.

Bomber is keen to relive the ‘good ol’ days’ – you’ll be amazed! He’s got a fascinating story to tell and you won’t forget the time you met ‘The Bomber’!