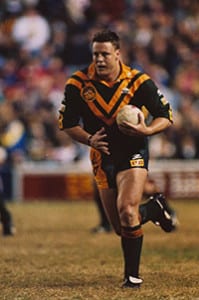 Lazarus won premierships with the Canberra Raiders, Brisbane Broncos and Melbourne Storm, who he also captained. He is the only player in the history of the game to win grand finals with three separate clubs, with the grand final wins also being the first for each club. After his retirement from football he assisted several NRL clubs in a coaching capacity.

In the 2013 federal election, Lazarus was elected to the Australian Senate for the state of Queensland as the lead Queensland candidate for the Palmer United Party (PUP). He became PUP Senate leader at the commencement of his term on 1 July 2014. He quit PUP on 13 March 2015 citing issues with its leader Clive Palmer, and established his own political party, the Glenn Lazarus Team.