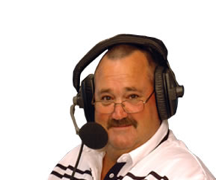 ‘The Big Marn’ was a talented, big-boned, brute of a ball-playing forward who made his name with Penrith in the 1980’s.

The game was tough and Darryl was strong and a bugger to tackle. But he also possessed a deft touch, a robust football brain and (some say) an unhealthy obsession with Cadbury Top Deck!

Brohman’s name was forever etched in the annals of rugby league history when he had his jaw broken by a vicious Les Boyd elbow on his Origin debut for Queensland. Darryl was sidelined for the remainder of the season and Boyd was suspended for twelve months. Later, Boyd tried to clear the air by saying the blow was an accident. Darryl had this to say: “Of course it wasn’t deliberate, Les. That is the way we were taught to tackle: you must run in with your elbow cocked at the head of an opponent. That should stop ’em, shouldn’t it, Les?”

These days, Darryl is pleased that the game has been cleaned of those sorts of incidents. He is a fine commentator and TV host. He is not afraid of making fun of himself, and provides a great source of material and comment for the show.

When not at a game or working, Darryl loves nothing more than to visit The Vinyl Room, a nightclub for old people. Ask him about it!