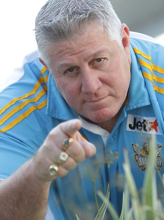 Did Chris ‘Choppy’ Close get his nickname because he had arms like a woodcutter’s or because of his enthusiastic approach to a dust up? No one loved the biff more than this passionate Queenslander who seemed to relish every opportunity to throw a few. Choppy was a regular visitor to the Origin arena during the 1980s and no fan will forget him wading his way through Blues opponents, swinging lefts and rights with a wide grin on his face.

Choppy was a fierce competitor, no doubt, and probably the most famous of his ‘wacks’ was his back-hander to the face of Eric Grothe in the 1981 Origin match. But he wasn’t simply an enforcer; not only a tough guy; not just a crash-through crusher. Chris was a forward-sized centre who also excelled on the wing. He was highly skilled and has the distinction of being one of only a handful of players named Origin man-of-the-match more than once.

After retiring, Choppy took on the team management of the Maroons. He’s never short of an opinion on the state of the game, particularly outspoken around Origin time. Chris has plenty of inside stories to share; and you’ll be able to get up Close and personal!