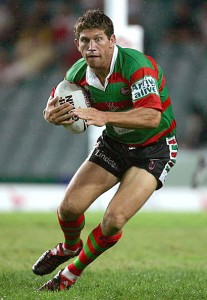 Whilst Fletch is best known as co-coach of the Nepal Donkeys and the other (best?) half of ‘Fletch and Hindy’, he did have some success as a player in the NRL.

Fletch earned thirteen caps for Australia and played fourteen times for the Blues in State of Origin. Proof of his natural talent, he had played only 24 NRL games when he was first selected for the Australian team to compete in the 1999 Rugby League Tri-Nations tournament.

At club level, Fletch achieved premiership success for the Roosters in 2002 before captaining the Rabbitohs and winning the George Piggins Medal as the club’s best and fairest player in 2003. Although deep down he has a soft spot for the club that brought him a premiership, Fletch admits that his allegiances are inevitably torn when Souths plays the Roosters. “The beauty of it is that I just barrack for whoever wins!” That’s loyalty for you!

Of his 14 games for the Blues between 1998 and 2003, Game Three of the 2000 series was the most controversial. Fletch was the man at the centre of the most famous try celebration of all time when he and half a dozen team-mates enacted the ‘hand grenade’ on their way to a record 56-16 win. The Maroons still talk about it! “They haven’t forgotten about the hand grenades – I know that much. I’m sick of it. I should be getting a Queensland tracksuit for that because I’ve been the motivation for years!”

Fletch’s influence is felt across the nation.  The coach of the Nepal Donkeys has plenty to give.