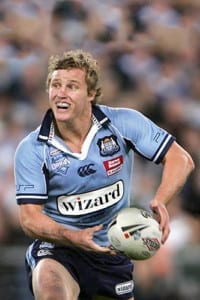 Brett John Finch (born 20 August 1981 in Maitland, New South Wales) is an Australian former professional rugby league footballer of the 2000s and 2010s. A New South Wales State of Origin representative half back, he played in the National Rugby League for Australian clubs the Canberra Raiders, Sydney Roosters, Parramatta Eels and Melbourne Storm. Finch also played in the Super League for English club Wigan Warriors (with whom he won the 2010 World Club Challenge and 2011 Challenge Cup Final).

At the Canberra Raiders Finch won the club’s Rookie of the Year award in 1999. He debuted earlier in that year against the Melbourne Storm in round 14 as a 17-year-old.

Finch joined the Sydney Roosters in 2003. As 2002 NRL premiers, the Roosters travelled to England for the 2003 World Club Challenge against Super League champions, St Helens R.F.C.. Finch played from the interchange bench in Sydney’s victory. In 2004, whilst playing for the Sydney Roosters, Finch threw a bottle back into the crowd after he was pelted by a Canterbury Bulldogs fan. Finch played for the Roosters at scrum half back in their 2004 NRL grand final loss to cross-Sydney rivals, the Bulldogs.

The Roosters and Finch agreed on an early termination of his contract, allowing the Eels to sign Finch on a two-year deal from the Roosters, commencing from the 2007 season. The Eels then extended his contract to the end of the 2011 season, reportedly to be worth $1 million for 3 years.

On 14 April 2009, Finch signed a one-year contract with the Melbourne Storm, his fourth club in eleven NRL seasons. Storm coach Craig Bellamy commented: “He will add depth and experience to our squad and gives us further options in the halves.”

He got his revenge beating his old team, Parramatta, in the 2009 grand final, setting up 2 tries. However, the NRL later discovered significant salary cap breaches and stripped the Storm of this win. This made it third time unlucky for Finch, having lost two Grand Finals with the Roosters.

In July 2010, Finch signed with then Super League champions, Wigan Warriors. Finch played for Wigan in the 2011 Challenge Cup Final at scrum half back, helping defeat Leeds 28-18.

After his two-year stint at Wigan, Finch returned to the Melbourne Storm for the 2013 NRL season. He joined the team as a back-up to halves pairing Cooper Cronk and Gareth Widdop.

After retiring at the end of 2013, Finch, between 2014 and 2016 worked as a Sideline Commentator on Channel Nine’s NRL Coverage as well as semi-regular appearances as a panellist on The NRL Footy Show, However Finch departed Channel 9 at the end of 2016, citing mental health issues.