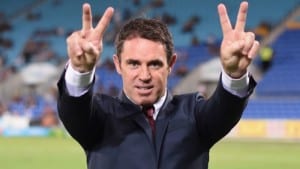 Over 16 seasons, Brad Fittler set a standard for longevity and durability that few rugby league players could match. Perhaps the only comparable constant since Fittler’s debut in 1989 to his retirement in 2004 was the five-eighth’s line-breaking sidestep.

Fittler averaged more than 27 matches per season. Combining club and representative games, he played 409 matches, more than any other player at the time.

A two-time Australian Schoolboys representative, Fittler began his first-grade career with Penrith when he was still a high-school student.

He played in the Panthers’ grand final loss in 1990, then in the club’s first premiership side in 1991.

Representative football came in 1990 with Fittler making the first of 31 appearances for NSW. Fittler is still the youngest NSW State of Origin player (18 years 114 days).

Fittler led the Roosters to the 2002 premiership and grand final appearances in 2003 and 2004, and also led NSW 14 times, winning eight matches. He captained Australia in 20 Tests for 17 victories.

In 2000, Fittler received the Golden Boot award as the world game’s best player. In a fairytale end to his rep career, Fittler returned to the NSW side in 2004 at the urging of coach Phil Gould, and played a central role in the Blues’ series win.