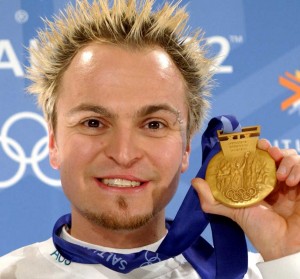 Gliding over the finish line at the 2002 Salt Lake City Winter Olympic Games saw Steven Bradbury’s name etched into the history books. Skating in the 1000m final and in fifth place, the unthinkable happened. Race favourite Apolo Anton Ohno from the United States and the other 3 skaters ahead of Steven, fell in a tangle of skates and arms and legs on the ice. Leaving the path clear for Steven, he glided across the finish line in first place and became the first EVER Australian to win a Winter Olympic Gold Medal !!! For the speed skater with the eye-catching spiky bleached blonde hair and charismatic grin, it was a fitting end to his athletic career.  In an interview after winning the gold, he said:

“Obviously I wasn’t the fastest skater. I don’t think I’ll take the medal as the minute and a half of the race I actually won. I’ll take it as the last 12 years of hard slog I put in.”

Steven Bradbury is 1 of the world’s most recognisable & colourful Olympic champions.

Steven has an impressive career as an Olympic athlete that has been driven by determination, sacrifice and most importantly a will to succeed.  With the same passion as he has shown on the ice, Steven has continued his success as a motivational speaker / MC / Keynote Speaker / Staff Motivator / Event Personality / After dinner speaker to corporate clients, sporting clubs, schools and charity organisations.

His warm friendly nature, down to earth manner and use of humour is sure to help ‘break the ice’. The Bradbury story is one of the true Aussie battler who overcomes much adversity to achieve the ultimate goal.

Steven’s achievements in speed skating include: