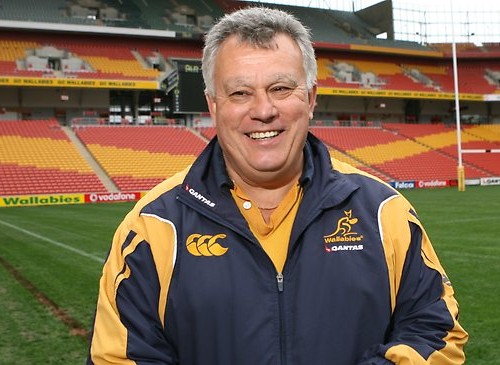 There’s pressure and then there’s coaching the Wallabies. There are more spotlights on the rugby boss than were shone skywards in London during the blitz. If the team wins, they’re all champions; if they lose, the coach is a dud! Not many coaches qualify for Long Service Leave!

‘Knuckles’ Connolly was a good player in his day, a hooker with the Brothers club, but it was as a coach that he made his name. He did his apprenticeship in Darwin and with Queensland junior teams before taking on the senior team in1989 and immediately enjoying some success.

With the arrival of Super 12 in 1996, Connolly continued his position at the Reds. They won the minor premiership that year, and Connolly went on to win the Super 12 Coach of the Year award in both 1998 and 1999.

Later, he took his coach’s hat to France, Wales and England where he tasted more premiership success.

In early February 2006 ‘Knuckles’ was appointed as the new head coach of the Wallabies, crowning an impressive career. He’s strongly regarded as one of the best forwards coaches Australia has ever produced. Also known for his forthright views, Connolly is always quotable when asked about the state of the game.

John Connolly gives a highly entertaining and insightful presentation covering his experience with rugby union, and the rewards and pressures involved in coaching the Australian rugby team.