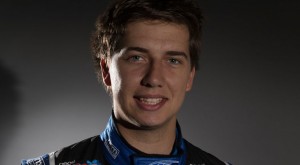 He barely looks old enough to hold a drivers licence, but Chaz Mostert is no novice. After all, he’s already won a Bathurst, Australia’s Great Race for V8s and did it after starting at the back of the grid, the lowest ever starting position to win!             That’s some drive!

Chaz got the chance to mix it with the Big Boys in 2010 in the V8 Supercar Series driving a Falcon. He exceeded expectations, leading to another contract for the 2011 season and he performed strongly for the team, particularly in wet conditions. Ford Performance Racing signed him for the next round at Sandown to drive the team’s first development series car, an FG Falcon. Chaz scored a pole position on debut for the team and performed well for the remainder of the season. In 2014 a string of strong performances led to a competitive end to the year, finishing seventh after a tight fight for fifth in the Championship.

It’s hard to think of a more exhilarating and challenging experience than throwing a car around a track at the limit – he’s a brave young man! But there is one experience that tested Chaz more than scraping a wall at 300kmh. Recently, he got into a pen with cheetahs: “Scared the crap outta me, so it was really quite cool to say I was standing a metre away from a cheetah!”

Nothing much else scares this young gun. He’s the King of The Mountain and one of the stars to watch. And a good bloke, too.