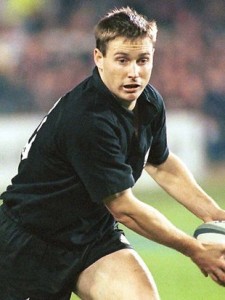 New Zealand rugby has had few players who have won such wide popularity and affection as Andrew Mehrtens, who in a 12-year career at first class level became a national figure and an icon of his Canterbury province.

Mehrt’s legendary kicking skills, vision and long passes made him a thorn in many Australian teams’ defences. Canterbury Coach Brian ‘Aussie’ McLean paid tribute to Mehrtens’ influence: “If Mehrts was in your team you had a pretty good chance of winning it!”  All Blacks coach Graham Henry said: “Andrew has been a world-class player and was probably the best No 10 in the world in the late 1990s.  Over the last decade he has been one of our foremost All Blacks and a great character.”

Outside the playing field, Mehrtens has proved to be a favourite with fans and a large section of the media because of his pleasant manner, his intelligence, his wit and sense of humour.

Mehrts is a local now and talking rugby is one of the things he does very, very well. He can navigate a way through an array of subjects while barely drawing breath.  Just like the way he played the game!