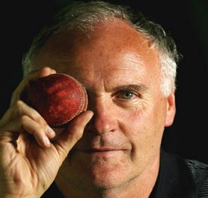 That’s all you need to know about Hoggie.

Rodney Hogg started life as a batsman before discovering that he could be a mean fast bowler. He probably thought he was always a batsman, even when he was languishing at the bottom of the order; he did crack an impressive 52 in one match. But it was as a somewhat erratic but very quick bowler that he made his name.

That Hogg’s autobiography is titled “The Whole Hogg – Inside the Mind of a Lunatic Fast Bowler” says something about this tyro. He did have moments when he would kick down the stumps, storm off the field or engage in a public spat with his captain. But in between times, he took down some famous batsmen with aggressive bowling and the occasional sledge. The way he beat up on England’s Geoffrey Boycott particularly endeared him to the Australian public.

Since retirement, Hoggie has never been short of an opinion about nearly everything and has become a very accomplished public speaker.

“We had no idea that we were going to be engaged in ‘side splitting laughter’ for a full hour, as Rodney entertained everyone with his crazy ‘story on story on story’. You did not have to know anything about cricket to enjoy this WOW of a performance.”