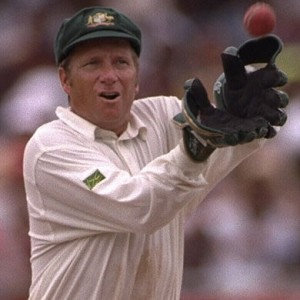 They said he’d never make it – how wrong were they? For ten years, Ian Healy was the lifeblood of the Australian team, the never-say-die fighter, the whisperer from behind the stumps (“bowled Warnie”), the leader of men. From ‘good, ordinary player’ at the start of his Test career, Heals worked and willed himself to be recognised as keeper in the Australian team of the 20th century. That’s some accolade!

Heals’ uncompromising approach to the game was simply ‘Total Cricket’. He prided himself on 100% involvement in training, on turning himself into a reliable, attacking batsman (slashing cuts and hooks became a trademark) and in keeping expertly to the quicks. But he was possibly at his best keeping to the slow bowlers – he could read the vicious spin of Shane Warne better than any batsman – and formed a brilliant partnership with the leggie.

The only skill he never mastered was bowling – although Heals could do a pretty good impersonation of Merv Hughes.

Despite breaking every finger at some stage of his thirteen-year career, Heals only ever missed one Test match. That was his way. These days he speaks sense from behind a microphone. Ian Healy is one of the greats of the game and well worth a night out.