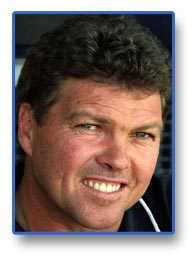 One of the characters of cricket, and affectionately known as “Fat Cat”, the burly Greg Ritchie developed into a first class batsman who possessed wonderful timing when in full glorious flow.

Ritchie headed both test and tour averages in his first international tour, the only Australian to reach three figures in the series.

Ritchie played 30 Tests, scored 1690 runs at 35 including three centuries and seven half centuries.

Greg played for Queensland for 10 seasons. In the year 2000 he was named as one of the seven greatest Sheffield Shield run scorers in Queensland’s history for amassing over 6000 runs for his state.

Greg is a past member of Triple M’s Home Grown Breakfast Show on Brisbane radio. His unique sense of humour was heard every week day for three years. Not long enough many have said!

His character Mahatma Cote, who has appeared on Channel 9’s Footy Show, can still be heard in Adelaide and Perth.

Greg Ritchie is an excellent after dinner speaker and the complete MC for all occasions. He is a motivator capable of inspiriting corporate clients and he is a most humorous raconteur.