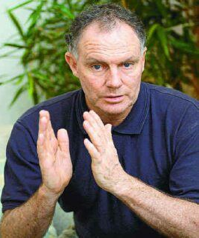 Greg Chappell didn’t like anything to distract him when he was in the middle. One Kiwi streaker found out the hard way when Greg caught him and gave him a right thrashing during an innings in New Zealand!

With a century in his first and last Tests and 22 others in between, Greg Chappell was the pre-eminent Australian batsman of his time who allied elegant stroke making to fierce concentration. From a famous cricketing family – his grandfather, father and two brothers all played for Australia – Greg started hitting hundreds for his school when he was just twelve. A junior coach was heard to mutter, “He could go far in the game, this lad!” He went all the way to captain the country.

Greg emerged as one of the great batsmen on his first tour of England, where his 131 in the Lords Test on a bowlers’ wicket was considered a modern classic. Richie Benaud wrote:

“…I thought it close to the most flawless innings I had seen and I still believe that to be the case. It was beautifully elegant with wonderfully executed strokes, great technique …”

Greg’s Test career batting average of 53.86 has him among the elite players but he’s not remembered just for that. He was a handy bowler, brilliant fieldsman and creative captain. However one day at the MCG threatened to overshadow all those achievements: the underarm ball. In what almost resulted in a declaration of war from New Zealand, Greg told his brother Trevor to bowl the last ball of the innings underarm to a bewildered Brian McKechnie. It was within the rules, but suffice to say it was a less than popular decision. It now has a place in the folklore of the game.

Greg has maintained a role in the game and is now Cricket Australia’s National Talent Manager. Previously he has coached in Australia and overseas. He has a fascinating story and can hold an audience spellbound. But no streakers allowed!