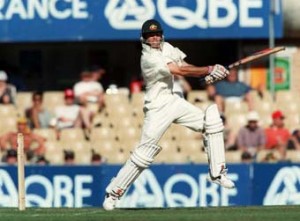 Gregory Scott Blewett (born 29 October 1971) is a former right handed batsman and a right arm medium fast bowler who represented Australia in both Test and ODI matches from 1995 to 2000.

Greg Blewett began his domestic career in 1991–92 playing for South Australia in the Sheffield Shield and One Day domestic tournament competition in Australia. He made his international debut for the Australian team playing for Australia A during a World Series Cup tournament against Australia in 1994–95. During this tournament he displayed his batting performances against former Australian fast bowler, Craig McDermott. In January 1995, he made his Test debut for Australia against England in the Adelaide Oval in South Australia; scoring a century on his debut match. He followed that with a century in the WACA Ground in Perth during his second match and scored a century at Edgbaston in England in 1997 and scoring three centuries in his first three Ashes Test series.

During his peak, he batted with aggression and he was effective against both fast bowlers and spinners. He was particularly strong square of the wicket, which was rewarded on his home ground, the Adelaide Oval. He was also an effective medium pace bowler (average bowling speed 125 km/h). His highest Test match score was 214 runs, against South Africa, reaching a double-century (200 runs) in Johannesburg in South Africa. Most of those runs were achieved with his captain, Steve Waugh, with whom he was involved in one of the highest batting partnerships in cricket when the pair scored 309 runs, batting for an entire day’s play without losing a wicket.

Currently Greg is a commentator with Fox Sports.