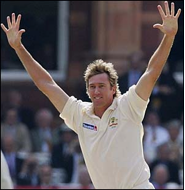 When he received his first Test cap in 1993, one of his team-mates described him as a ‘one iron with ears’. He took 3 New Zealand wickets for the match and made a first-ball duck, not earth-shattering numbers, but the young McGrath showed enough menace and irrepressible confidence for the selectors to back him in.

Needless to say, ‘Pigeon’ repaid that in spades! Nowadays, the greatest compliment an aspiring fast bowler can receive is to be called ‘McGrath-like’. As well as his meticulous line and length and fiery temperament, ‘Pidge’ also enjoyed an occasional chat with the batsman. Anyone at the far end holding a bat was enemy and fair game. In Tests, 563 men lost their battle with him. See this:

In retirement, his astute commentary and cheeky reminiscences are now entertaining TV viewers and live audiences around the nation. Glenn McGrath is as much a showman off the pitch as he was on it. He has a million stories of Ashes glories (and disasters – remember Edgbaston), Indian summers, Calypso capers and just about everything and everyone in the game.

Oh, and then there’s that glorious 61in Brisbane, or the miracle catch at Adelaide …