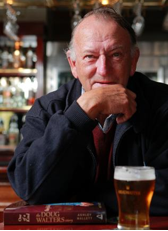 Dougie was the cricketer every Australian loved. He epitomised the Aussie spirit – pugnacious, positive, a little cheeky and irreverent in the face of authority.

On the field he had a swagger about him that infuriated opponents (especially the English) and when he batted, his instinctive and aggressive approach put even the best bowlers to the sword. Off the field (so the stories go) he would drink all night without getting drunk and then after a few hours in the cot would make a slashing century or take a crucial wicket or cling onto a stunning catch – sometimes, all of those on the same day!

On one celebrated occasion, Doug was toasting an unbeaten century after play at the team hotel bar. At some stage, but certainly after everyone else had gone off to bed, the tour manager was called because the hotel couldn’t afford to pay the barman any more overtime! Walters backed up the following day and took his score to 250 from 342 balls. Another time, he borrowed a spectator’s bike to ride from third-man at each end after being punished by Ian Chappell for oversleeping.

However, the legend grew not from these antics but from his brilliant batting. Three times Doug brought up centuries in a session, the most famous when he clobbered the last ball of the day from Bob Willis for six at the WACA in 1974-75. He was fearless against the quicks and devastating against the spinners. Dougie was, in his day, the ‘Coolest Man in Cricket’!