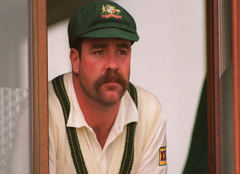 For those of us aspiring sportsmen who don’t have Olympic Athlete physiques or Silver Spoons in our mouths, David Boon is a hero. ‘Boonie’ showed what steely determination and hard work can realize – the mantle as one of Australia’s finest top-order batsmen and close fielders.

Boonie played for Tasmania when it was a fledgling cricket state and to get a Green Baggy cap, first you needed a sky-blue one! His portly figure (and legends about beer-drinking records) belied his fitness and strength. Boon was to become Australia’s top batsman in the early 90’s with brilliant centuries against the West Indies, India, and successive hundreds against England at Lords, Trent Bridge and Headingly. He was to make 21 Test tons, none better than his 184 not out in the second innings of the Bicentennial Test at Sydney to extricate Australia from a potentially match-losing position. He received the player of the match award for that knock and was voted International Cricketer of the Year.

After his playing days finished, David became an Australian Selector and lately an IOC Match Referee.

Boonie never had tickets on himself. His affable nature and humility are always on display. And he’ll set the record straight on those beers!

“David was very generous with his time and sharing stories of his personal experiences as a cricketer with the audience first as a whole then as individuals afterwards.”