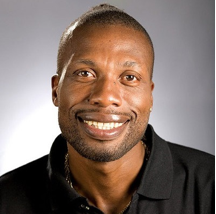 Sir Curtley Elconn Lynwall Ambrose never really liked cricket as a boy. His favourite sports were basketball and football. Cricket was too long and took up a lot of energy so it was never on his list – in fact, he avoided it. Curtly was 21 before he played a serious game, but it all came together quickly after that.

Curtly was fearsome from 20 metres away. The Antiguan giant (201cm) was renowned as one of the greatest fast bowlers of any era, and wrought havoc in world cricket by claiming 405 Test wickets at 20.99, breaking the spirits (and bones) of many a good batsman along the way.

“Our opener played like a blind man swatting at flies. Five balls screeched past his flailing bat; the sixth made a horrible mess of his stumps. He didn’t see one of them!”

Curtly’s bowling was a monotony of pace, movement and accuracy. He seemed to be at his best against the best – and often took wickets in clusters which devastated the opposition

Curtly rarely engaged in verbal sparring with batsmen, although he occasionally inspected the pitch in an area close to the batsman before an innings began and would rub his hands to suggest that he would enjoy bowling there! And his body language was worth a thousand words if an edge flew past the slips or a close LBW appeal was turned down.

His partnership with Courtney Walsh is legendary. Together, they terrorized world cricket and helped launch the West Indies to the top.

Off the field and in retirement, Curtly is happy to talk about his cricketing exploits (although he’s not interested in statistics – not even that he took 5 wickets in an innings 22 times or his 7 for 1 against the Aussies!).

Curtly is keen on music, starring with his latest band ‘Spirited’. He’s an all-round nice guy, provided you’re not 20 metres away holding a bat!