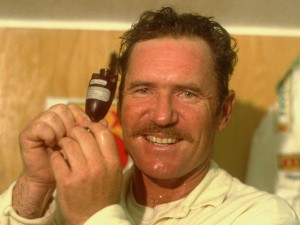 Greatness reveals itself in many ways.

Some people are life-savers, some life-givers. Some have the wisdom to prevent wars, some the courage to fight them. Some have the creativity to make the world an easier place, some the gift to make it a better place.

On the sporting field, greatness has been seen in the breathtaking athleticism of Michael Jordan, the sublime skill of Lionel Messi, the incredible stamina of the Tour de France rider.

In cricket we view greatness in the sheer weight of runs scored by Bradman and Tendulkar, the elegant strokeplay of Gower and Lara and the punishing power of Greenidge and Botham.

But for unyielding courage, bravery and utter defiance, Allan Border embodied greatness as one of Australia’s best batsmen and captain. Some say he was THE best, for when Australian cricket reached its lowest ebb Border gave the nation hope.

Time and again, he went out and saved us: or won us the unwinnable: never taking a backward step.

Border looked them in the eyes throughout his career, never flinching, always counter punching, often the last man standing.