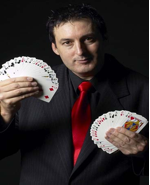 Jack always uses this talent for peaceful means. The fact that he could probably turn the audience into baboons is no more than a temptation. Instead, he makes objects suddenly appear, or burn, or float, come to life or disappear forever.

But his show is not just about conjurer’s tricks. His passion to entertain and his charismatic personality always captivate. Audience participation, one-liners and visual gags are parts of a diverse and thoroughly engaging performance.

However, Jack will cause occasional fits of mighty frustration from his audience. This is not his fault. Jack is so good that even when he performs magical routines just inches away from your eyes, there’s no way to answer “How did he do that?”

Jack Black – Australia’s best. But keep sweet with Jack – you don’t want to give him a reason to turn you into a baboon!