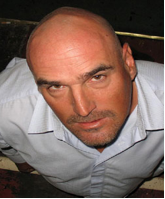 Anyone who can make John Howard laugh must be a funny bloke. And Fred Lang is! His love of stand-up comes from a deep seated need to have his say and avoid getting arrested! Fred considered politics, but thought it would be bad for his reputation. So he chose comedy!

Fred’s entertained them all – the ones who think they’re important and influential (see first sentence) and those who are (like Sir Vivian Richards.)

Having led an interesting life, Fred draws on experiences from a childhood that was a little different to the norm (both his parents escaped from Eastern Europe after WW2) and his belief that youth gets it way too easy nowadays (having been a youth, Fred’s an expert on that issue).

Fred is a 17 year veteran of the stand-up comedy circuit. Preferring to be called Legend, Fred is old, not adorable, obstinate, has selected hearing, likes thunderstorms and would sleep 20 hours a day if he could!

There is no doubt that Fred Lang is a proven performer in all facets of comedy. His hectic diary proves his popularity at all levels of the industry in Australia.

Don’t miss an opportunity to see this hilarious comedian with a proven ability to relate to audiences from all backgrounds.