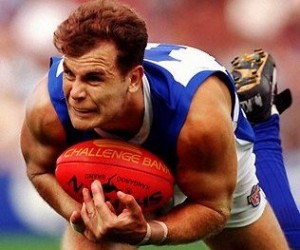 It would take a pretty big wall to display all the medals and trophies won by North Melbourne great Wayne Carey in his illustrious career. As such, the man they called the Duck (and sometimes ‘King Carey’) is always one of the first mentioned when debate rages in the front bar of many a pub over who was the best player of all time.

Those lucky enough to have seen him play will remember the way he tore games apart. Carey would take huge pack marks with three or four opponents scragging and spoiling; he would launch mighty punts from the centre square that would sail through the goals; he would feed the ball to smaller team-mates while being tackled and hit. Such was his dominance that a special game tactic was devised – Pagan’s Paddock, named for Carey’s coach – where the other forwards were told to ‘clear out’ to make space for the Duck and any number of nervous opponents; the instruction was to get the ball in long and quick and let Carey do the rest. He seldom failed.

Such was his influence that some critics suggested ‘no Carey, no North’. He would deny that, pointing out footy is a team sport and he was surrounded by some pretty good players. But there’s no doubting that if there had been no Carey gracing AFL grounds, there would have been fewer fans of the game, fewer kids taking it up. ‘No Carey, no AFL?’ Not quite – but he was a giant of his time.

His is one heck of a story that all sport lovers will enjoy.