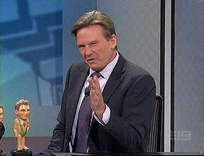 Compared to his other world, John ‘Sam’ Newman’s football career was plain and simple. Sam was a fine mark, excellent tap ruckman and accurate kick. The 300-gamer for Geelong was club champion twice, All-Australian once, represented his state nine times and was inducted into the AFL Hall of Fame.

But some of that has been forgotten since the popular Sam hit the airwaves as a commentator and television star. His witty observations on the game and its players have made him a favourite of footy followers, even if he’s not always complimentary to his subjects. Some years ago, one Adelaide radio station was under pressure from some of its listeners to take Sam’s regular segment off the air because he ‘always said nasty things about our team!’ But the segment rated its socks off and the station kept Sam and his unique view of the game.

Not everything Sam has done has been popular with the authorities. However, Sam has been able to bounce back up from the occasional setback and still is one of the funniest blokes going around. And you’ll find that he is amiable and pleasant, providing you’re not one of the crazies he manages to regularly find in Street Talk!