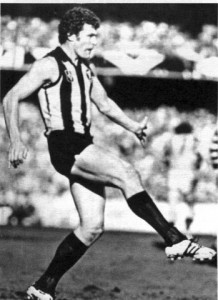 ‘Fabulous’ Phil Carman (born September 4, 1950) is one of the most naturally talented aussie rules players ever to pull on the boots. When he decided it was his day, he would make everyone else on the field look like Sunday afternoon park footballers!

His class was on show from the very start. He debuted for the Magpies in 1975 at the age of 24. That year he was the ‘pies leading goal kicker with 41 goals and won the Copeland Trophy for Collingwood’s best and fairest. Carman achieved all of this in his debut year even though he broke a bone in his foot and was out for 9 weeks. He still managed to finish only 3 votes away from winning the Brownlow Medal! In 1976 Carman also was Collingwood’s leading goalkicker.

Unfortunately for ‘Fabulous’ he was suspended for the ’77 grand final and its replay against North Melbourne which Collingwood ended up losing. After the ’78 season he departed from the Magpies and joined the Melbourne Football Club. He spent only the one year at the Demons and moved onto the Essendon Football Club. His two seasons there were marred by a 20 week suspension for head-butting a boundary umpire and in his comeback match he was reported again.

He moved to North Melbourne for his final years, in 1982. He then retired from football, at the age of 32, and played for regional clubs in Victoria and also in the ACT.

He then coached Sturt in the SANFL from 1995 – 2001. Instrumental in Sturt’s resurgence as a power in the SANFL after a run of wooden spoons from 1989 – 1996. Sturt did not win a game in Carman’s first year and he built the team up to win the 1998 Minor Premiership, only to fail to Port Adelaide in the Grand Final.

‘Fabulous’ Phil Carman is widely regarded as one of the most gifted footballers of all time. People still talk of seeing Phil play, running circles around the opposition in his white boots!