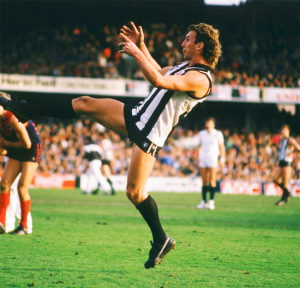 Daics was the electric and amazing player that dazzled not just Collingwood supporters but true lovers of the game over a 250 game playing career full of personal and team highlights.

Peter Daicos was not the quickest player in the league; he was not the highest mark; he wasn’t the strongest tackler; sure, he was very good in all those facets, but what set him apart from every other player before or since was his consistent ability to kick freakish goals from seemingly impossible angles!

Those who watched the ‘Macedonian Marvel’ strut AFL grounds would shake their heads in disbelief every week at another impossible Daicos goal. In the beginning, opposition supporters and journalists dismissed them as a ‘fluke’; Daics would be deep in the pocket with his back to goal, be tackled aggressively and just manage to get his foot to the ball. It would bounce and wobble right through the middle; and then he’d do it again, from an even tougher angle. But when people started to see Daics practising the same ‘flukes’ at training, and repeating the impossible game after game, it was clear it was fluke no more. These days, whenever a player scores a freakish goal, especially one that bobbles and bumps along the ground, you’ll hear people say “He’s done a Daicos!”

Peter has been an AFL commentator since retiring and has always been humble about his achievements. But he doesn’t mind telling people about those incredible goals and like all  good story-tellers, don’t be surprised if the angle was tighter and the distance further the day Daics kicked that ‘fluke’ against Geelong at Victoria Park!