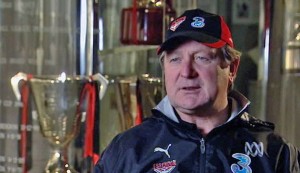 Kevin John Sheedy AM,  was the coach of AFL club Essendon, and a former player for Richmond. He holds the AFL record for the most games combined as a player and coach and represented Victoria in the 1969 State of Origin carnival.

Sheedy was the quintessential self-made player. Not blessed with great skills, he was able to carve out a brilliant career with dedication, perseverance and thoughtfulness.

Sheedy  set up Richmond’s Grand Final win in 1973 with three goals in the first quarter. In 1974, he was best afield in the Grand Final with 30 disposals highlighted by an uncanny piece of play in the second quarter. Sheedy marked next to the goalpost, went back to apparently take his kick from the impossible angle surrounded by opposition players, then casually ran in and handballed over the head of the man on the mark to lone teammate in the goalsquare who booted the easiest goal of his life. It was this mixture of flamboyance and cunning that attracted the media to him, and Sheedy was voted player of the year by journalists.

Sheedy made good copy; during the season Richmond had appointed him as full-time promotions officer, effectively making him the first professional footballer in the VFL. In time, all of the clubs would copy this appointment and by the 1980s, most clubs had a half dozen or so players employed as promotions officers. It was a bridge between the casual Saturday afternoon era and the age of true professionalism in the 1990s.

After his retirement, he commenced a coaching career with Essendon that has endured through several eras of the game. Sheedy is an innovator whose ideas shaped the modern style of Australian football coaching, taking it away from the “hot gospelling”, hard training style and into the realms of a science. He has been at the forefront of many changes to the game in the last 25 years, and, despite his idiosyncratic speaking style is always sought for an opinion on any matter concerned with football.

Sheedy is also noted for his quirky antics, outspoken nature and wry sense of humour. For example, strong rumours suggest that before a game against West Coast Eagles at Essendon’s former home ground, Windy Hill, he tied the windsock down on the School End outer terrace so the opposition would not know which way the wind was blowing. He is also fond of talking about how Martians cost his side the game in post-match press conferences, an oblique reference to the umpires, as AFL rules forbid coaches from criticising umpiring decisions. Such stories perpetuate the eccentric Sheedy myth and enigma to trial anything for success.

Another of his most memorable stunts came in 1993. In his excitement at winning a close match, with ruckman and forward Paul Salmon kicking a goal after the final siren against the West Coast Eagles, he waved his jacket in the air as he came rushing from the coaches box. To this day, the supporters of the winning club wave their jackets in the air after the game when the two teams play.

Sheedy currently has an ambassadorial position with the AFL.