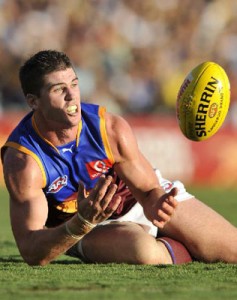 He was the Lion’s King. One of the best big men ever in the game, Jonathan Brown was the player every coach dreams of having – courageous, strong, imposing, skilful and loyal.

In his fearless attack on the ball, Browny led his team from the front, like all good generals. In every game, every contest, Browny was, some would say, crazy brave.

Which is why the fans loved him.

The cumulative effect of years of heavy knocks, particularly some horrific facial injuries and concussions, saw Browny retire a little earlier than he would have wished. But the Brisbane legend left the game with three Premiership medals, a host of awards and decorations and AFL guru Mike Sheahan’s vote as the number one player in the competition.  He was a giant of the code.

Off the field, Browny is an unassuming, knockabout fellow, happy to have a yarn and share a drink.  He once said his favourite meal was pizza and an ice-cold beer! He’s one of those blokes that even opposition supporters like and it would be impossible to find an enemy among rival coaches and players.

Jonathan Brown, never one for frills around the edges, wants to simply be remembered as a man who gave everything for the cause. For that, he’ll never be forgotten.