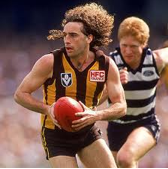 Some say he had more hair than the Yeti; others simply knew him as The Rat. As the all-powerful 1988-89 Hawthorn side reached the height of its powers, so too did the Rat. He treated his taggers with disdain. Those who survived ‘Dermott-isation’ – the quaint practice that Dermott Brereton perfected of hurtling off the centre square line and wiping out Platten’s unfortunate opponent in a sickening bump – were merely run off their legs, as the tireless little marvel moved at the same lightning pace all day long.

Everyone agrees that John Platten was one of the greatest rovers to ever play the game. Platten’s exuberant style made him a firm favourite among fans and he brings the same enthusiasm and energy to the table at his speaking engagements.

Anyone who played with Brereton, Dipper and Dunstall and against Lockett, Blighty and Frawley has plenty of stories, true and tall.

The Rat also loves a chat after the show. You’ll be charmed by this legend of the game – and he’s still got some of that hair!