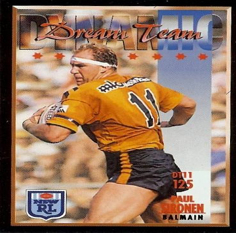 “Nobody in football should be called a genius. A genius is a guy like Norman Einstein.”

The player who uttered those brilliant words (and shall remain anonymous) hadn’t seen Paul Sironen play. A member of the Balmain/Wests Tigers Team of the Century, Siro was an Origin star in the Blues jersey 14 times and was capped 49 times for Australia.

Siro could have been lost to League – he started his sporting career as a defensive tackle playing Gridiron for the University of Hawaii, but “never got to touch the ball enough” so after the first season ended, moved back to Australia and, in his debut year with the Tigers, was named the Dally M Rookie of the Year.

He’s got a mountain of amusing stories from football and his other lives as a policeman and a model for Lowes Menswear!

Paul Sironen will entertain you in more ways than ‘Norman’ Einstein had theories – and he sure was a better footballer!

“Paul was terrific to work with! No request was too hard. He got on great with other panel members and interacted really well with the audience. If we do another event again Paul will be at the top of our list to invite back!”