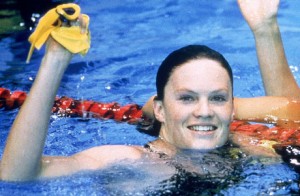 Julie McDonald is up there in rarefied air – because she’s an Olympic medallist. The best of the best go to Olympic Games and Julie was certainly one of them when she was selected for the Australian swimming team for Seoul 1988. Her concentration, discipline and hard work earned her the Bronze Medal in the 800m freestyle, that punishing distance only the toughest can swim. Indeed, she was the only Australian woman to win a swimming medal in Seoul where the East German dopers dominated.

Until very recently, Julie was the fastest female 800 metre swimmer Australia has ever produced and she also swum her way to two Gold and two Silver Medals at Commonwealth Games and a Gold, Silver and Bronze at Pan Pacs. In total she represented Australia with distinction 13 times.

As well as being damn quick in the pool, Julie’s expertise involves motivational speaking and humorous after dinner talks. She’s a straight shooter with a great story to tell.