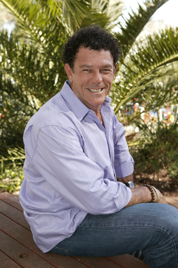 Possibly Whit’s finest moment as a batsman came with three runs needed to win, and Joel Garner bowling. Whitney smeared a glorious cover drive and took off like a cheetah. Turning a two into a three, he beat the fielder’s throw, (Viv Richards, no less!) winning the match on the last ball with one wicket to spare. Pity it was just a Toohey’s beer ad!

In real life, Whit’s top score was 13 but very few people will remember it. More celebrated was his survival against New Zealand, bravely keeping out the likes of Richard Hadlee for 18 balls to save the match. Unfortunately, there’s not much else to report on the batting front.

As a quickish fast bowler, he took 11 Indian wickets in his best match performance and was probably unlucky not to play more tests. His first test, however, came as a bolt out of the blue.

Whit was just 22 years old and the veteran of a solitary season with New South Wales, when he went to Fleetwood in the Northern Lancashire League. After two months of struggling with the cold, he was called down for a trial with County side Gloucestershire and impressed immediately. After just one championship match the phone rang again: this time it was the Australian tour manager, Fred Bennett. Australia had injury problems, he had form, and within 24 hours, Whitney was playing in the fifth Test at Old Trafford, where he capped a whirlwind summer with the wicket of David Gower. His first spell in Test cricket lasted one ball – then the rain came!

Whit was a favourite among Australian cricket fans for his sense of humour and whole-hearted approach to the game. He brings these qualities and his experience with numerous radio and TV programs (18 years and counting with Sydney Weekender!) to his entertaining shows. Whit is happy to chat about his career. You might even ask him for a song. And there’s so much more to Whit, like his involvement with the Rabbitohs, Who Dares Wins and Gladiators. Probably best you don’t ask about his batting, though!