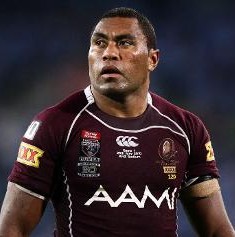 The bloke with that name!

If you were to say it properly, it would be ‘thee-vo-ni-there-va’. As no Aussie commentators could possibly get their tongues around that, he became ‘siva- ni- seva’

And because even that was a challenge for some, the big man became:

One of the Broncos’ favourite sons, Petero Civoniceva was nearly a front-row great at the Roosters after being pursued by the late Arthur Beetson. Beetson went tantalisingly close to delivering the teenaged Fiji-born player to the Bondi Junction glamour club during his long tenure as the Roosters’ talent scout.

But the Broncos swooped and, apart from some time at Penrith, Civoniceva went on to become a Brisbane legend. However, he looked up to Beetson as a role model and did Artie proud with his stirring performances at Origin level.

Civoniceva learned from some of the best front-rowers in the modern history of the game so it was no surprise that he followed the same path to the top. He was making his way through the Broncos’ ranks when Glenn Lazarus was the leader of the pack in the mid-1990s and then it was Shane Webcke who showed the way with his disciplined approach and dedication to the cause.

Civoniceva’s strength of body and mind carried him through 15 seasons at the top level and it was a tribute to his durability that he became the first individual to play State of Origin beyond his 36th birthday in 2012.

The big fellow will regale with stories from his more than 300 games. Just try not to get his name wrong!