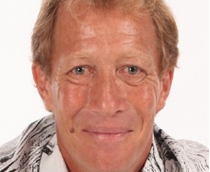 Steve was born to comedy – his folks couldn’t wipe the smiles from their faces when they first saw him!

As a schoolboy, Steve loved to trade a joke for a lolly with his mates and his variations on the ‘dog ate my homework’ theme always got a chuckle from his teachers.

After graduation and in lieu of a job, Steve decided to pursue comedy. He travelled over a million kilometres on the circuit honing his craft so that now his laid-back, friendly style of comedy has a polish and delivery that guarantee laughs.

“Daddy’s really funny”, one of his critics recently stated.

Steve Allison knows how to make people laugh. With a natural sense of humour and quick wit, his show is a well-crafted mix of snappy one-liners, hilarious stories, funny home truths, crazy impressions and juggling. It’s Aussie humour at its best!

Stand out performances in comedy clubs have led to countless corporate gigs, international tours and television appearances. His international experience includes tours of South Africa, New Zealand, Papua New Guinea, and P&O cruise ships. All this experience gives Steve the ability to perform a hilarious original show of fun, laughter and the unexpected!!

“Great line – I’m gonna use that!” said Mike Whitney. You can’t get any higher praise than that!