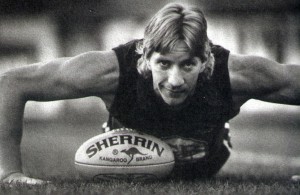 David Rhys-Jones, born in 1962, was one of the true characters of Australian rules football. He began his colourful career in 1980 at the fledgling Sydney Swans Football Club where he showed very early on that he was to be a superstar of the competition.

In 1985, Rhys-Jones moved to Victoria to play with the Carlton Football club. His greatest day in football was the 1987 grand final. Not only did Carlton win the premiership, but Rhys-Jones was also named the best on the ground winning the Coleman Medal. He played with the Blues until he retired in 1992, amassing 182 games.

With his blond hair and aggressive attitude he stood out on the football field. The umpires certainly noticed him! By the time he retired he held the record for the most tribunal visits – 25!

The Hyphen, as he was affectionately known, was one of the original sufferers of white line fever and one of the icons of 1980’s aussie rules.